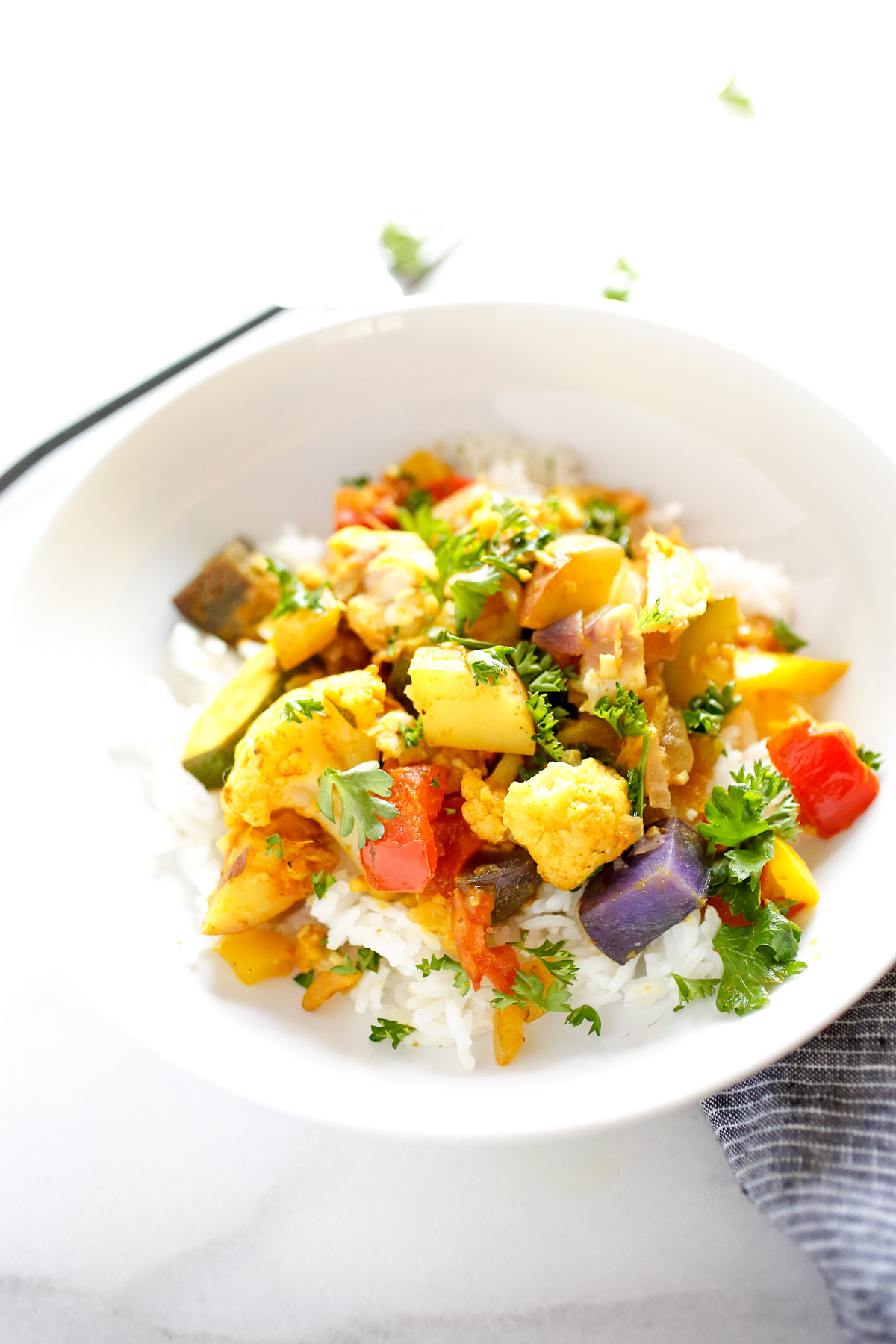 “Unless someone like you cares a whole awful lot, nothing is going to get better.  It’s not”     ~ The Lorax Last week, an Introduction that touched briefly on many of the topics we’ll cover

Before I started studying, I would have said, “I’m not exposed to that many chemicals”  Oh my, was I ever wrong.  Most of us are exposed to them every day (certainly to varying degrees), depending on what our jobs are and where we live

Dr. Sherry Rogers – a specialist in environmental medicine offers a sobering reality.  No one is immune.  As a baby enters the world, his or her exposure begins immediately.  In fact, most born in a hospital have detectable levels of phthalates (or plasticizers).  They’ve been exposed from the plastics found in everything from plastic bags to the IV tubing that was attached to their mom during delivery

There have been a number of studies conducted on people who simply stopped to pick up their clothes at the dry cleaners.  Four hours later, they still had measurable levels of perchloroethylenes in their blood

Putting gas in our car exposes us to benzene.  People who drink their morning coffee (or anything, really) out of a Styrofoam cup, are exposed to the plasticizers, formaldehyde, and some benzenes

Cigarette smoke, whether someone smokes or is simply around others who are smoking, exposes them to a crazy amount of chemicals.  One of which is cotinine (a byproduct of nicotine). Infants that live in a home with parents who smoke will have very high levels of cotinine in their urine Because of air pollution, a lot of us think of environmental toxins as mostly being outdoors.  Certainly, that’s the case, but it’s probably more important to consider the pollution that’s happening indoors.  Studies show we spend (on average) only an hour outside every day(!)  Which leaves the rest to be spent at home, the office, or

It wasn’t that long ago (the 1970s) when the shift toward more energy-efficient buildings began.  The biggest effect?  The amount of fresh air being circulated indoors dropped considerably.  Right around that time, there was also a significant increase in synthetic furnishings and building materials.  Most of these materials are made from petrochemicals, which release their vapors slowly over time; aka: out-gassing

Many of these out-gassing vapors are known carcinogens and respiratory irritants.

Tighter construction, coupled with more air-conditioned buildings, have seen increases in bacterial and mold-related illnesses.  These building often have windows that don’t open and closed ventilation systems that are constantly re-circulating the chemicals in the air.  Not only are we exposed to it once, but continuously, all day long

There’s even a “sick building” syndrome based on reactions to toxic vapors coming from the glue, pressed wood, new carpets, paint, varnishes, any kind of furnishings and plastic floor coverings like vinyl

Then there are the chemicals we use around the house.  Any kind of cleaning solutions, furniture polishes, things we wash and dry our clothes with.  (Dryer sheets are notoriously loaded with them)  We have pets in need of flea and tick prevention.

One of the most prolific chemicals in our environments is formaldehyde.  It’s found in most building materials, but also regular office supplies too (think paper supplies, file folders, etc.)  As they release formaldehyde into the air, it contributes significantly to indoor air pollution

There are a number of others, and these are the pollutants that cause damage, particularly the respiratory tract.  They destroy the hair-like villi that are so very important for the removal of all kinds of bacteria, viruses, molds, pollens and all kinds of particles.  Once the respiratory tissues are damaged, the viruses, bacteria, and chemicals pass right into circulation, and we’re far more sensitive to infection and allergies The Jobs We Do

What are some of the jobs at the top of the list for toxic chemical exposure?  Hairstylists, painters, chemists, anyone installing flooring, manufacturing techs, auto mechanics.  Dry cleaning is one of the worst

Anyone who cleans for a living, is a custodian, contractor, or works in a print shop.  Any occupation that uses solvents, cleaning compounds, paints, pesticides, herbicides, lawn care chemicals, varnishes, inks, dry cleaning supplies or hair care products, or is exposed to plastics

Anytime someone works around solvents, cleaning compounds, paints, pesticides, herbicides, lawn care chemicals, varnishes, inks, dry cleaning supplies or hair care products, or are exposed to plastics or textiles .. they can almost guarantee they’ve been exposed to (at least) a low-level of toxins

Farmers are one of the most high-risk groups unless their farms are organic.  I think of this every time I’m driving through the Iowa countryside on my way to the garden, and see them out spraying their fields One of the biggest complications people exposed to these kinds of toxins face is malnourishment.  Either by a loss or destruction of nutrients in our body.  It’s really a vicious cycle.  These are the nutrients that supply the cells of our detox system .. and it’s these cells that allow us to be less susceptible to exposure

A few examples?  From the Kellogg Report by Dr. Joseph Beasley

Workers handling pesticides suffered from a severe disruption of vitamin A.  Exposure to low levels of PDBs cuts down in vitamin A stores in the liver, by as much as fifty percent(!)

In smokers, their blood levels of vitamin C were lower by forty to fifty percent

Should I Consider Taking Supplements?

“Can’t I get all the nutrients I need from my diet alone?”

I think that once upon a time, people used to be able to get all of the nutrients they needed from their diet.  But the food was different, the atmosphere was different, or jobs were different.  The circumstances of our lives have changed dramatically

Today, most people probably should consider at least a multiple vitamin-mineral and also an antioxidant on an ongoing basis.  They’ll help us better cope with this toxic load It Isn’t So Obvious

Most people, if they knew something wasn’t good for their health, would try to avoid it or take some precautions to safeguard themselves.  Instead, toxins make an appearance in lots of unexpected places

Bedding – Whether foam rubber or cotton pillows or mattresses, they’re laced with pesticides and fire retardants.  These can cause toxicity to the nervous system

Vinyl flooring contains many dangerous chemicals.  One of which is benzene.  Exposure to benzene alone can cause infertility, anemia, and damage to blood cell chromosomes that can be linked to leukemia

Cosmetics – often contain hidden toxins (particularly nitrosamines). These have been known to cause cancer. Especially black hair dye. It contains significant mutagenic chemicals, which can damage the DNA code (a precursor for cancer)

Air pollutants (indoors and out) – is one of the greatest health risks people have.  People living in polluted cities have a four-fold risk of emphysema.  There’s also a significantly higher risk of asthma

Urban water sources.  Most municipal treatment plants neither detect nor detoxify the water supply of the majority of chemical pollutants.  That leaves them flowing right out of our taps

Water in plastic bottles  – As the plastic breaks down, it has a tremendous capacity to disrupt hormonal pathways (in both men and women) Our diet – There are over four hundred different pesticides that are used legally on food crops in the U.S.  In 1980; there were two hundred sixty-eight million pounds of pesticides sprayed on California crops alone(!)

Additionally, a lot of large-scale farming practices really deplete the soil of vital nutrients.  That leads to the production of foods that lack the fundamental nutrients our bodies need to not only sustain themselves but also protect against these toxins

Most of these food pesticides have an affinity for the nervous system.  People tend to have more anxiety, are more hyper-excitable, and have a variety of learning disorders.  These are more pronounced in our young children and elderly

This Isn’t Always Easy to Understand

The risks of chemical exposure just aren’t well understood. It’s not communicated.  It’s not written.  Most of the chemicals are on a label, but it doesn’t tell us that they’re toxic or identify them as a poison.

Unfortunately, people usually find out after they’ve already been diagnosed with some kind of a condition; when they’re already sick and much more chemically sensitive

How do our bodies clear all of these toxins?  It’s a big job(!) There are a number of things I almost always have in the kitchen.  At the top of the list?  A few cans of coconut milk, onions, nuts, and spices.  It puts me just a veggie or two away from a flavorful pot of richly colored curry.

The one featured today is detox friendly, comes from Dana James, and has quickly become a go-to at our house.  A reminder that no matter what’s going on around me, the act of making something healthy for dinner is one worth practicing.

Depending on what’s in the fridge, I might serve it over a bowl of rice or grains.  The curried veggies are also wonderful alongside an omelet or crepe for breakfast, or simply on their own.

It’s worth noting that, while I like this particular spice blend, most times I’ll use curry powder or paste instead.  They’re nice for the evenings when I’d like to take the spices in an entirely different direction.

I decide what to include in a curry by thinking about a couple of different things.  A curry that’s hearty and substantial is great when the weather’s cold.  During the warmer months, one that’s lighter with a little more broth.  Root veggies, potatoes, cabbage, chickpeas and the like when it’s stormy outside.  Fresh peas, asparagus, and other finds in the spring

Last week I was just home from the farmer’s market when I decided to make this one.  Having a fresh pepper and zucchini in my bag, and grabbing some cauliflower from the freezer.  Worked great.  Play around with what you have locally and seasonally. It’s hard to go wrong

Below, I’ve also included a recipe for one of the curry powders I like to make from scratch.  It’s evolved gradually from a Madhur Jaffrey recipe I jotted down years ago from a magazine I was browsing through in a waiting room.

How authentic is it?  I’m not too sure.

What I am sure of is, I love the warming spices accented with plenty of kick from the dried red chilies, and sometimes if I’m making it only for my husband I’ll add extra.  The turmeric gives everything it touches a stunning golden hue while playing along with toasted cumin for an earthy finish.  Feel free to experiment with or substitute your favorite curry powder here

~ Adapted from From Curries to Kebabs: Recipes from the Indian Spice Trail by Madhur Jaffrey 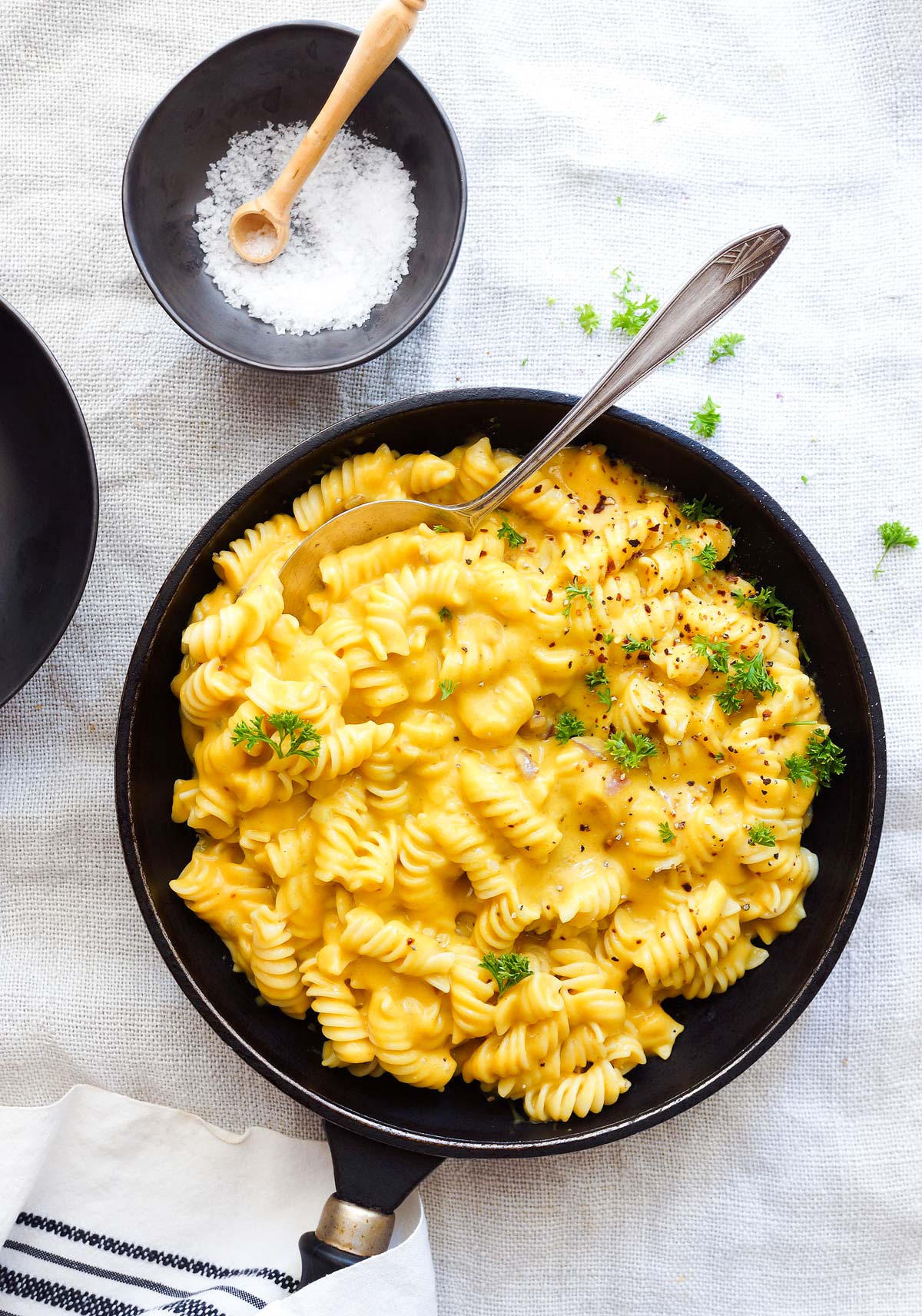 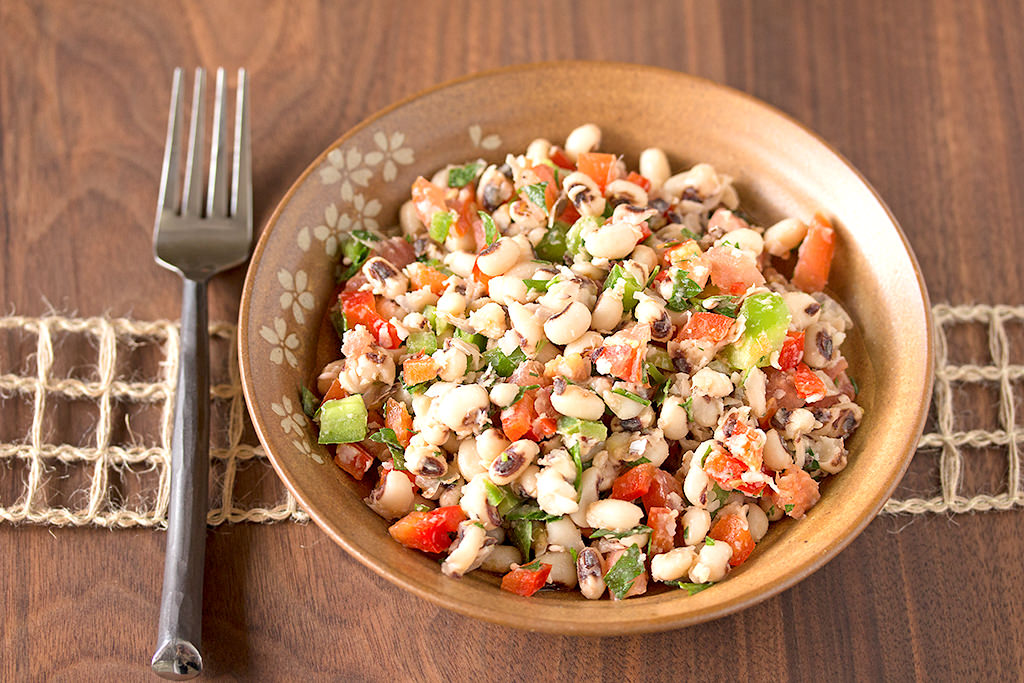 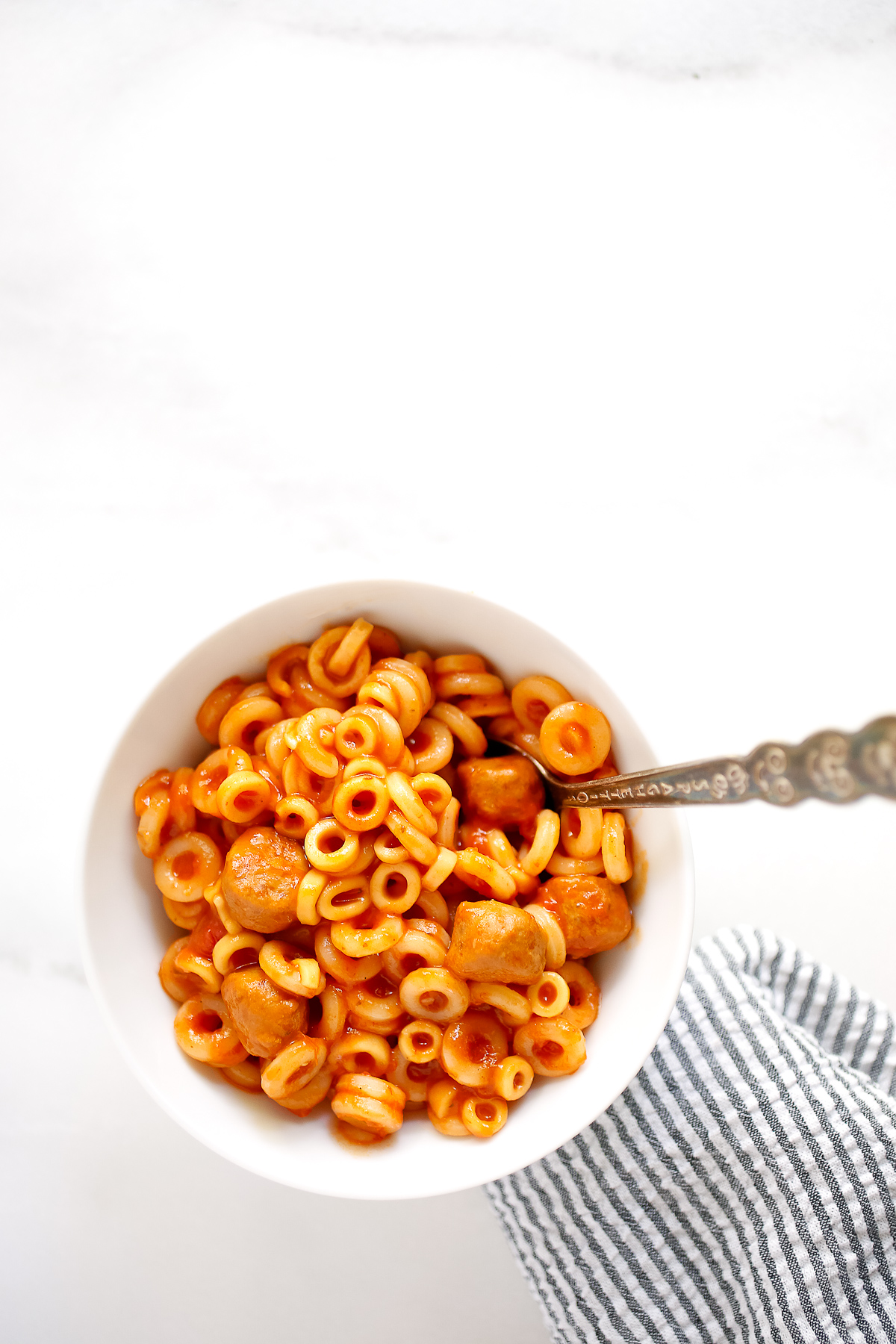 SpaghettiOs For the Grown-up’s Table